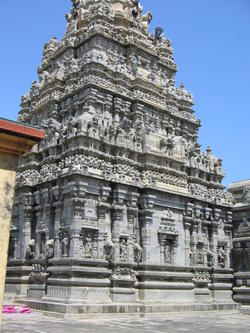 The moolasthanam (central piece) is considered to be large saligrama The Kurma(Turtle) is known as Sri Kurmam in the 'Sampradayam'. The image is not a sculpture crafted by man, but the fossil of an actual (large-size) turtle. The head of the deity is in the form of a Kurma (tortoise) and is represented by a Vishnu namam, the tail being represented by a Saligrama presented by Adi Sankaracharya.